Herpes Simplex Keratitis | What is it, Causes and Treatment

What is herpes simplex keratitis?

Herpes simplex keratitis is an eye infection affecting the cornea (the outer most protective layer at the front of the eye). It is an infection with herpes simplex virus, which is the same virus causing cold sores around the lips.

Herpes simplex keratitis causes an ulcer on the cornea. Most of the time, these ulcers can be treated easily with eye ointment. Rarely, the condition can cause severe visual impairment, which occurs in approximately 1.5% of people who suffer from the condition [1]. 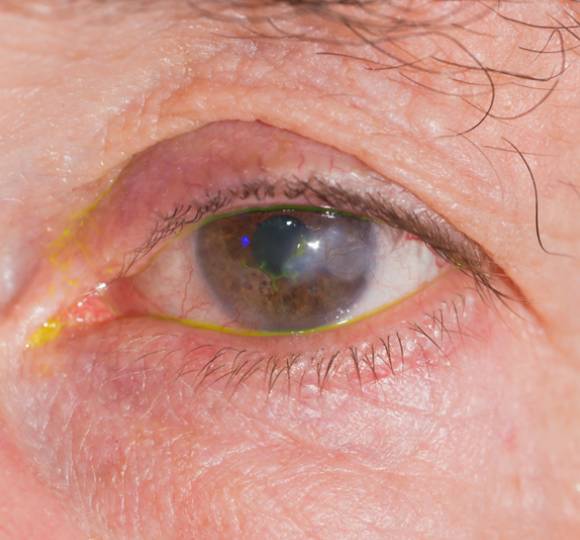 This overview will cover the global problem of herpes simplex keratitis, its causes, common signs and symptoms, its different categories, how it progresses, how it is diagnosed, its treatment options, and whether it can be prevented.

Herpes simplex keratitis is a common eye condition. In developed countries, the incidence of the condition is estimated to be 23.3 per 100,000 people per year [1]. The incidence in developing countries is less well known but is considered to be at least as common as in developed nations.

From an economic perspective, it is estimated that in the United States, US$17.7 million is spent per year on the treatment of the condition [2]. There is likely to be additional economic impact associated with long-term issues relating to the condition, such as time off work and visual impairment.

Following this first infection, the virus remains dormant in the nerves supplying the skin of the face. From time to time, the virus will reactivate through these nerves. Most of the time, this reactivation presents with recurrence of cold sore blisters around the lips. In some people, the reactivation of the virus occurs in the eye, most commonly presenting as herpes simplex keratitis.

Following initial infection, the rates of recurrence of herpes simplex keratitis are estimated to be 10% at 1 year and up to 36% at 5 years [3].

Triggers for reactivation of herpes simplex virus may include:

What are the common signs and symptoms of herpes simplex keratitis?

The most common signs and symptoms of herpes simplex keratitis include:

If you experience any of these signs and symptoms, schedule an appointment with an eye health professional to get your eyes checked. It is also important to note that the development of eye conditions may even start before symptoms appear, which makes going for regular and timely eye checks that much more essential.

What are the categories of herpes simplex keratitis?

Herpes simplex keratitis can be categorised by which part of the eye it is affecting. The condition most commonly affects the outer layer of the cornea, the outer protective layer of the eye, and this is called epithelial keratitis.

In its more severe forms, it can affect the deeper structures of the cornea (called stromal keratitis) or cause inflammation in the eye (called keratouveitis). Very rarely, herpes simplex virus can affect the retina which is a very severe form of herpetic eye disease (called retinitis or acute retinal necrosis).

How can herpes simplex keratitis progress?

A small proportion of patients will experience scarring of the cornea which significantly impacts the vision. Failing to treat the condition may increase the risk of scarring and long-term issues with vision.

In a smaller proportion of people (estimated to be 2.6 per 100,000 people per year [3]), a more severe form of herpes simplex infection occurs whereby the deeper structures of the eye are affected. In these cases, the treatment is different and more prolonged and the risk of long-term visual impairment is higher.

How is herpes simplex keratitis diagnosed?

Herpes simplex keratitis is diagnosed by an eye health professional based on a comprehensive eye check. The most important component of this is the slit lamp examination, where a microscope is used to look at the eye. An orange stain called fluorescein that produces a greenish-yellow fluorescence by reflected light is usually used to highlight the area of the ulcer. 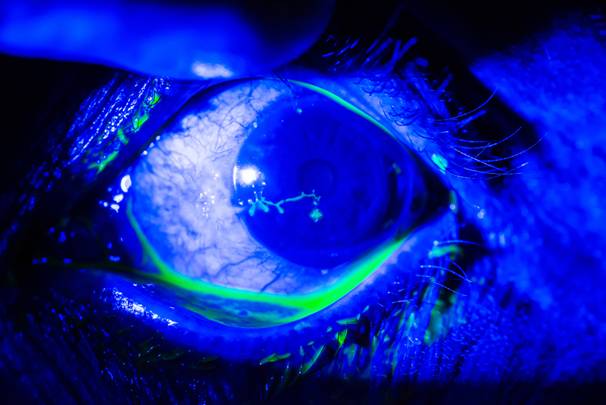 A swab of the cornea may be taken and sent for analysis to confirm the presence of herpes simplex virus.

How is herpes simplex keratitis treated?

In its mildest and most common form, herpes simplex keratitis affects only the outer layer of the cornea (the epithelium) and is treated with antiviral eye ointment. The medication used may vary but most commonly includes an antiviral medication called aciclovir.

In more severe forms, other medications may be used including steroid eye drops and oral antiviral medications in tablet form.

Can herpes simplex keratitis be prevented?

In cases where recurrences of herpes simplex keratitis are frequent, prophylactic oral antiviral medication may be prescribed and has been shown to be effective in reducing the risk of recurrence [5].

This may be particularly useful for people who have experienced more severe forms of herpes simplex keratitis where the risk of visual impairment is higher with recurrences. Other groups of people such as those with compromised immune systems may also benefit from prophylactic antiviral therapy.

Avoidance of the triggers described above may also assist in reducing the frequency of recurrences.

DISCLAIMER: THIS WEBSITE DOES NOT PROVIDE MEDICAL ADVICE
The information, include but not limited to, text, graphics, images and other material contained on this website are for informational purposes only. No material on this site is intended to be a substitute for professional medical advice, diagnosis or treatment. Always seek the advice of your physician or other qualified health care provider with any questions you may have regarding a medical condition or treatment and before undertaking a new healthcare regimen, and never disregard professional medical advice or delay in seeking it because of something you have read on this website.

Why does my eye twitch? >

How does the eye work? >

What is the difference between an ophthalmologist, an optometrist and an optician? >