Uveitis is an eye condition in which inflammation occurs inside the eye and affects the middle layer of the eye called the uvea. The uvea is a layer of tissue that includes the iris (the coloured part at the front of the eye), and other structures behind the iris (the ciliary body and the choroid). The ciliary body consists of smooth muscles in the eye that help to control the shape of the eye lens when focusing on nearby and distant objects. The choroid is a layer of blood vessels and connective tissue that provides nutrients to the retina. 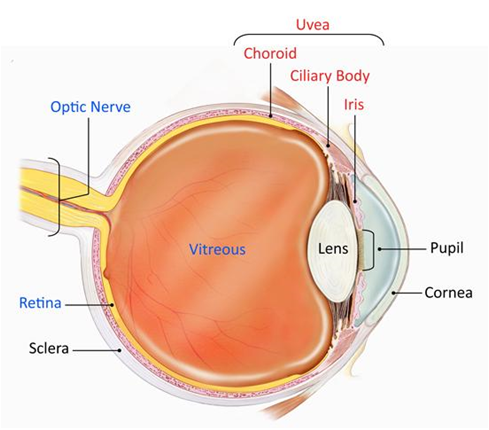 There are different causes of uveitis, including the presence of autoimmune and inflammatory conditions such as rheumatoid arthritis (a disease that causes the body’s immune system to attack healthy cells, resulting in painful swelling in the joints) and ankylosing spondylitis (a disease that results in a rare type of arthritis causing pain and stiffness in the spine). Infections such as herpes simplex virus and varicella zoster virus or injury caused by trauma can also contribute to the development of uveitis. In many cases, no underlying cause is identified.

The following sections will briefly outline the types of uveitis, public health implications of uveitis, more detail on what causes uveitis, its signs and symptoms, and some insights into its management and treatment.

What are the types of uveitis?

The type of uveitis is classified based on the location of the eye at which the inflammation occurs. Anterior uveitis has been found to be the most common type of uveitis. 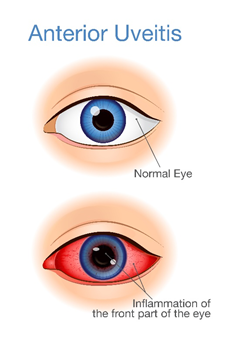 Intermediate uveitis involves the middle portion of the eye and inflammation occurs in the vitreous (a gel-like fluid region of the eye that helps to maintain the round shape of the eye) as well as the peripheral retina (the area of the retina responsible for side and night vision).

Pan-uveitis occurs when all the major parts of the eye are affected by inflammation. Behcet’s disease is one of the most well-known causes of pan-uveitis.

How many people suffer from uveitis?

The causes of uveitis also vary by location in the world. Different inflammatory and autoimmune causes are more common in certain parts of the world and in different ethnicities. Uveitis caused by infections such as toxoplasmosis, tuberculosis, and onchocerciasis tends to be more common in developing countries such as South America and Africa.

Given these differences between geographic locations, it is difficult to give a global estimate of the economic burden of uveitis. However, in the United States (US), it is estimated that the cost of treatment for a uveitis patient varies between US$ 935 and US$ 1592 per month, depending on the treatment that the patient is receiving [4].

In most cases of uveitis, eye health professionals would refer to it as ‘idiopathic’. This means that there is no underlying cause behind the development of uveitis. In other cases, there may be an underlying cause or medical condition causing uveitis to develop. Some of the causes of uveitis are summarised below:

Presence of a genetic marker

Certain people carry a genetic marker called the HLA-B27 gene; its genetic code translates into a specific protein that is found on the surface of cells. People who carry this gene have a greater risk of developing certain types of autoimmune disorders. These autoimmune disorders can lead to uveitis and can also be linked to inflammation elsewhere in the body, including in the spine (ankylosing spondylitis) and joints (psoriatic arthritis).

Presence of other infections in the body

Different infections can cause uveitis. Current or past infection, in or around the eye, with herpes simplex virus (cold sore virus) and varicella-zoster virus (Shingles) can commonly cause uveitis. Rarer infections such as cat scratch disease, lyme disease, toxoplasmosis, tuberculosis, and syphilis can also cause uveitis.

Trauma to the eye

Uveitis can commonly occur following trauma to the eye, for example, trauma from being hit by a ball during sports.

Consumption of many medications has been linked to uveitis, but this is a relatively rare cause for uveitis. Antibiotics such as rifabutin, bisphosphonates used to treat osteoporosis, and certain biologic agents such as ipilimumab used to treat cancers are some medications that can cause uveitis.

Rarely, children can be affected by uveitis, which can be linked to an inflammatory joint condition called juvenile idiopathic arthritis (JIA). Children can also develop idiopathic uveitis (with no underlying cause) and uveitis related to other rarer inflammatory conditions and infections.

In rare cases, a type of cancer called lymphoma can cause the development of uveitis.

What are the common signs and symptoms of uveitis?

The most common form of uveitis, anterior uveitis, which affects the front of the eye only, usually presents with the following symptoms:

Rarer forms of uveitis, including intermediate uveitis (middle of the eye) and posterior uveitis (back of the eye) may also cause blurred vision and floaters (shapes moving across the vision). In some cases, this may also lead to a significant reduction in vision.

If you experience any of these signs and symptoms, schedule an appointment with an eye health professional to get your eyes checked. It is also important to note that the development of eye conditions may even start before symptoms appear, which makes going for regular and timely eye checks that much more essential.

How can uveitis progress?

How is uveitis diagnosed?

Uveitis is diagnosed by an eye health professional based on a comprehensive eye check. The most important component of this is the slit lamp examination, where a microscope is used to look at the eye. Inflammation can be seen with this microscope as white blood cells floating in the eye. 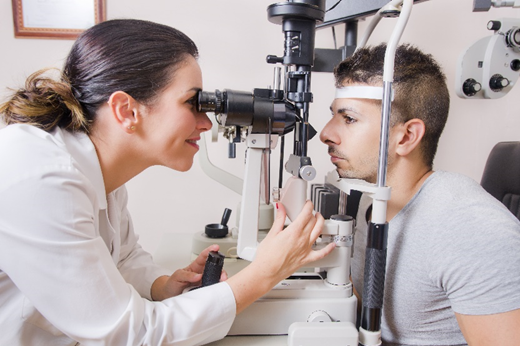 Other investigations such as a scan of the back of the eye (Optical Coherence Tomography/OCT scans) may be used to see certain parts of the eye in more detail by taking cross-section pictures of the eye.

In certain cases, blood tests and other investigations such as a chest X-Ray may be used to look for underlying causes for uveitis.

How is uveitis treated?

In some cases, where an underlying cause for uveitis is found, medications directed towards that underlying health condition can improve uveitis. Usually, a medical specialist such as a rheumatologist or immunologist will prescribe and supervise these medications.

Can uveitis be prevented?

Uveitis can be a one-off event that never occurs again once treated and resolved. In these cases, an underlying cause for the uveitis is usually not found.

When an underlying cause is linked to the development of uveitis, it is more likely to happen again in the future. Treating the underlying health condition can help to reduce the recurrence of uveitis.

The timely treatment of infections in or around the eye such as shingles and herpes simplex, as well as generalised systemic infections such as tuberculosis and syphilis, can also help to reduce the chances of developing uveitis.

DISCLAIMER: THIS WEBSITE DOES NOT PROVIDE MEDICAL ADVICE
The information, including but not limited to, text, graphics, images and other material contained on this website are for informational purposes only. No material on this site is intended to be a substitute for professional medical advice, diagnosis or treatment. Always seek the advice of your physician or other qualified healthcare provider with any questions you may have regarding a medical condition or treatment and before undertaking a new healthcare regimen, and never disregard professional medical advice or delay in seeking it because of something you have read on this website.

Why does my eye twitch? >

How does the eye work? >

What is the difference between an ophthalmologist, an optometrist and an optician? >